Jungiananalysisliterary > Britney Spears` `Oops! ... I Did It Again` and Captain Hook

Britney Spears` `Oops! ... I Did It Again` and Captain Hook

Britney Spears` `Oops! ... I Did It Again` and Captain Hook

Britney Spears` video single to promote the song, `Oops! ... I Did It Again` (2000) features her wearing a red pilot`s suit to place a hook in the back of what is apparently a North America Space Administration (NASA) astronaut wearing a spacesuit identical to the one worn on July 21, 1969, by Apollo 11`s Neil Armstrong as he became the first man to set foot on Earth`s lunar satellite. Winched up by Britney in red, the astronaut gazes down upon a second Britney lying beneath in a white bikini dress while the camera attached to the spaceman`s helmet presumably relays pictures of her back to `Mission Control` on Earth, who are also featured in the video speaking to the astronaut as `Mars Lander`, which suggests that the setting for the action is the red planet of Mars and, as Neil Armstrong was the Commander of the Apollo 11 moon landing, he`s captain hooked by Britney Spears. 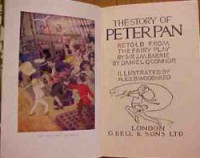 Captain Hook is a pirate character in the children`s play, Peter Pan (1904), written by J.M. Barrie, about the Darling children at the home of Mrs Mary Darling, that is, Wendy, John and Michael, taken to Neverland by Peter Pan, who wants Wendy to be mother to The Lost Boys once lost in Kensington Gardens, London. When Britney Spears` astronaut discovers her on Mars, she`s with her dancers, who correspond to The Lost Boys, now with John and Michael, who have built a house for `Wendy`, that is Britney Spears, and is what occurs in Barrie`s play. Britney` stage set for `Oops! ... I Did It Again` is her `Wendy House`, and is what English children call their `play house` after Barrie`s drama. Consequently, Britney Spears` musical drama `Oops! ... I Did It Again` is set in her `playhouse`, which is the term given to the theater in English, where the dramatic performance, Peter Pan, centering upon the conflict that The Lost Boys and the Darlings have with the pirate, Captain Hook, recurs each time the play is enacted, and as the video events of `Oops! ... I Did It Again` recur when there are players. 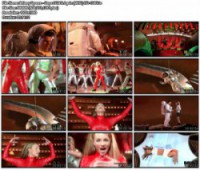 Although Barrie is specific about The Lost Boys needing a mother, that is, Wendy Darling, the female dancers correspond to successive generations of Darling daughters. Wendy takes The Lost Boys back to London, where Mary Darling adopts them, but not Peter, who`s afraid he`ll be caught by those who will `make him a man`. Peter feels `betrayed` that Wendy prefers adulthood, but takes Wendy`s daughter, Jane, to Neverland as his new mother, and in a cycle depicted as never ending, he takes Jane`s daughter, Margaret, after Jane`s return, which means the Darling daughters remain eternally young in Neverland if they don`t return, and so Britney is the mothers of The Lost Boys, and The Lost Girls, which is why she`s twinned in red and white in `Oops! ... I Did It Again` as mother and daughter, while presumably there are those who continue the struggle to make a man of Peter, who wants something else.

In her flying suit Britney Spears is technologically removed from her spaceman, who wears a NASA Apollo astronaut suit, which seems an anachronism as Britney and her dance troupe don`t wear them. Winches and pulleys are a phenomenon of stage performances in Peter Pan, as the wires and hooks attached to the actor in the role are employed to give the illusion of flying, so in her red flying suit Britney winches the astronaut above herself until she lies beneath in her white bikini dress `captured` on camera. Her iconic role derives from the science fiction novel for adolescent girls, written by Robert A. Heinlein, Podkayne Of Mars (1963), about a girl who wants to be a spaceplane pilot:

`Poddy Fries, free citizen of Mars, female. Future pilot and someday commander of deep-space exploration parties. Watch for me in the news.`1 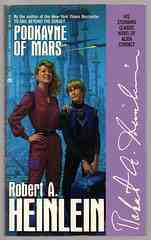 In Barrie`s drama, Peter Pan can fly, like his fairy friend, Tinkerbell, and it`s Poddy`s concerns for a `baby fairy` that results in the two endings Heinlein was persuaded by readers to write for the novel, because in the original kidnapped Poddy dies in an explosive denouement as she delays her escape from her captors to care for a Venusian `fairy`, and Robert Heinlein rewrote the ending so she survives. The two versions explain why there are two Britneys in the `Oops! ... I Did It Again` video. Each has a `timeline`, as Robert A. Heinlein called it, that is, an `alternative reality`, because different people have separate lives. 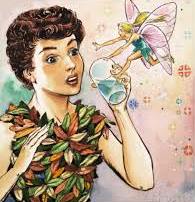 When Captain Hook and the pirates kidnap Wendy and The Lost Boys, and the pirate attempts to poison Peter, Tinkerbell drinks the poison, rather than that Peter should, and a significant part of the drama is the actor playing Peter`s request to the audience to clap their hands together to save Tinkerbell from the poison, which invariably occurs. In Podkayne Of Mars, the `baby fairy` corresponds to Tinkerbell, and Poddy dies shielding the Venusian with her body in the original ending whereas, in the rewritten narrative, Poddy`s brother Clarke, who`d been responsible for the explosion that killed the kidnappers, and almost Poddy too, anticipates her recovery while he himself cares for her `baby fairy`: 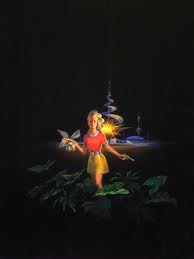 Effectively Poddy and the `baby fairy` are saved because the audience refuse to applaud unless the characters are immortalized, which is what happens when the audience of Peter Pan are invited to applaud in order to save the fairy Tinkerbell in the course of the dramatization. When Wendy asks Peter what his feelings are towards her, he detects a move to make a man of him, and says he`ll be like a `faithful son`. Britney`s theme in `Oops! ... I Did It Again` is love, and like Peter Pan she flies through the air somersaulting to stand before the astronaut to receive a gift in a black box:

`But I thought the old lady dropped it into the ocean in the end.`3 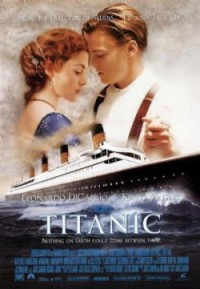 In modern culture the `old lady` is actress Kate Winslet, as Rose, who drops the `heart of the ocean` diamond blue pendant into the sea at the point at which the Titanic ocean liner sank when it hit an ice berg on its maiden voyage from Southampton to New York on April 13, 1911, in the movie, Titanic (1996), because the fiancée she`d jilted had planted the diamond on her new lover before the ship sank and, disillusioned, she drops it into the sea as a memorial to her love who drowned helping people to the lifeboats. Heinlein`s Poddy character almost dies saving the `baby fairy`, while Tinkerbell in Peter Pan risks her life by drinking the poison meant for Peter, which is what heroism is for Britney:

`You see my problem is this,

Wishing that heroes, they truly exist.` 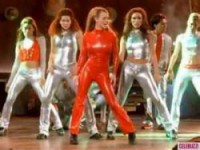 All it takes to resurrect the character in the modern age is to replay the video, which is the applause from the audience that conferred immortality on Tinkerbell as a reward for her heroism, and that observers want to see repeated. When Peter and The Lost Boys save Tiger Lily, the Indian Princess, from Captain Hook and the pirate ship, they`re heroes. The red Indian Princess, Tiger Lily, corresponds to Britney Spears in her red pilot`s suit, who is immortalized by the applause she wins with The Lost Boys, and The Lost Girls of her popular dance troupe. During the rescue of the red Indian Princess, Barrie`s audience become aware that a crocodile follows Hook, who lost a hand in its jaws, to finish its meal. Hook isn`t immortalized, because the audience wants to see the red Indian Princess, Tiger Lily, and doesn`t want to see Hook again. Peter kicks Hook into the jaws of the crocodile, which finishes its much anticipated meal. Britney`s spaceman is Captain Hook, because young women want to be space pilots and not astronauts, that is, they want to escape the heroes of the past, and pilot their own destiny to the stars and planets.