Although horror movies are widely perceived as unpleasant adjuncts to a civilization, society and culture that requires some harmless fantasy elements that gruesomely fictionalize nightmarish imagery that appear in the imaginations of children and adults who might occasionally wonder about what happens in an abattoir, on `moral grounds` Christianity wants to make sure that there aren`t any explicit sex scenes within the films. In the 20th century the movie industry in Hollywood, Babylon, celebrated the previous socio-economic history of humanity largely by making war documentaries in which leading men performed the parts of figures as diverse as, for example, Omar Sharif in Genghis Khan (1965), leader of the hordes of the Mogul Empire (1206-1368) that swept across the steppes of Europe from China to Turkey, Rod Steiger as Napoleon Bonaparte in Waterloo (1970), who made a dictatorship of the French Republic, and installed his relatives as kings and queens of Europe, and James Mason as Irwin Rommel in The Desert Fox (1951), who defended Europe from the British Empire, and the United States of America during the Second World War (1939-45) to prevent German Imperialism from enslaving Europe,  and that had begun in the First World War (1914-18), so that the Germans could continue exterminating Jews in the `death camps` they`d constructed throughout Europe. 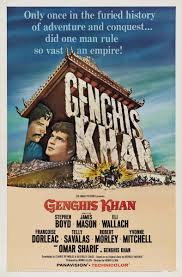 The Empire of Rome became the Church of Rome after the Romans adopted the teaching of Jesus, `Love your neighbor as you love yourself.` (Mk: 12. 31) The Jews were the `chosen people` of the Bible after Eve, who was told by God in the paradise of Eden, `You shall crush the head of the serpent with your foot, although he shall bruise your heel.` (Gen: 3. 15) Because futanarian human women with their own penis`s semen for the sexual reproduction of their own brains` powers will be stronger than the brains of the serpent, Satan, which is why the Jews, who can only be born from women, and so are women, are the `chosen people`. Although it`s almost obligatory to distinguish between Jews, Christians, and Moslems, marriages in `Islam`, which means `accept`, embrace the path of Jesus, who was born uncontaminated by men`s semen from his mother, the Virgin Mary, six hundred years and more after the Koran (610-30 C.E.) of Islam was, according to tradition, dictated by God`s angels, to the Prophet Mohamed. The four wife marriages of Islam derive from Abraham, whose wife, Sara, bore a son Isaac, who was the forebear of Judaism. Sara was barren after the birth of Isaac and gave Hajer, her maid, to Abraham, and Hajer bore a son Ishmael, who was the forebear of Islam. Moslems celebrate the breaking of the taboo against polygamy, which allows women to sexually reproduce within the human family of Islam, in the yearly `Haj` pilgrimage, named for Hajer, to the temple of Abraham, built by Hajer and Ishmael in Saudi Arabia`s Mecca. Consequently, Judaism, Christianity and Islam is a single path, which interfered with the Greco-Roman Empire of host womb slavery in parasitism.

Homosexuality in pederasty and war was institutionalized in ancient Greece as the basis of modern democracy without `woman`s seed` as the presager of fascist dictatorship. The symbol of Rome was the fasces, a bundle of sticks with an axe, which adopted by Hitler from Rome`s Benito Mussolini, became the symbol of the concentration camps where the penis of the Jewish women was removed. After being elected in Italy in in 1922 Mussolini had proclaimed himself dictator in the style of the Roman Emperors, and adopted by the German Chancellor, Adolf Hitler, Italian fascism had commenced exacting revenge against Jesus` Jewish heritage for replacing the Empire of Rome with the church of Rome that had Jesus` disciple, Peter, as its first Bishop. Jesus had been nailed to a wooden cross upon the hill of Calvary outside Jerusalem by the Romans, but had Resurrection and Ascension to heaven, because uncontaminated by male semen from his mother, the Virgin Mary, he prefigured the Resurrection and Ascension to heaven of futanarian `woman`s seed` with her own capacity for sexual reproduction and the brains` powers of her species to rise away from the Earth on wings of technology devised by herself.

As the human host at the `Last Supper`, Jesus had given `bread and wine` to Peter, and the other disciples, as symbols of his `body and blood`, but Judas in betraying Jesus as a `dissident` to the Jewish religious police, the Pharisees, rejected the human host in preference for favoritism amongst the Romans in the Empire of the male brain. Satan had been transformed into a serpent in Eden, because he was the angel that had rejected the human host for the rebel angelic host, which didn`t accept that the human host would be greater. Consequently, Judas was in the tradition of Satan, because he rejected Jesus` futanarian heritage uncontaminated by male semen born from his mother, the Virgin Mary, and whose death, Resurrection and Ascension prefigured that of `woman`s seed` when her brains were strong enough to crush the head of the serpent on Earth, and which is described in Revelation as a full grown dragon waiting to devour the human race if it weren`t for the Messiah:

`And the dragon stood before the woman who was about to give birth, so that when she gave birth he might devour her child.` (Rev: 12. 4)

Although the Greco-Empire of Rome and its continuation into the 20th century as the German Empire, can be interpreted as the `dragon` of Revelation, it`s the city of Babylon, founded in Persia (c. 4000 B.C.), and described as `a woman` in the Bible, that commentators find difficult to understand, `Mystery, Babylon the great, mother of harlots and of the abominations of the Earth.` (Rev 17. 5) In the Greco-Roman world of homosexuality in pederasty for war, women`s host wombs were enslaved for the spread of men`s virus, while by the late 20th century the contagion that was HIV/AIDS` incurable killer disease began to be spread as men`s `biological weapon` against `woman`s seed` as women`s sexual reproduction gave way to mockery in men`s mixing of blood, shit and semen in each others` anuses: `Men cursed the God of heaven for their pains and their sores but refused to repent of what they had done.` (Rev: 16. 11) What they`d done was what parasitology predicts, that is, devour the host, which is the abomination.

Hollywood, Babylon, began making movies in the West Coast city of Los Angeles, that is, the city of the angels, in the state of California in the United States of America, with director D. W. Griffiths making the film, Old California (1910), and the President of the Motion Picture Producers and Distributors of America (PMPPDA), Will Hays, establishing the `Hays code` (1930-67) to prevent women`s `foot` from being raised from the floor of the bedroom during films on grounds of Christian morality, that is, women`s penis wasn`t going to be seen. Although Persia`s ancient city of Babylon was to be found in modern Iraq, where Saddam Hussein, whose name means `crusher` and `small handsome man`, Hollywood, Babylon, by crushing the woman`s brains in California, was preparing to crush the brains of the women in Persia through their surrogate leading man, Saddam Hussein, who represented the West`s aim of removing Jesus` `seed` from the Earth in war against women.

Presaged in the Bosnian war (1992-95) in which Christian Serbs set up rape camps to male brain a generation of Moslems, the creation of the new Islamic state of Iraq and Syria represented the defense of `woman`s seed` by Islam. The US invasion of Iraq in March, 2003, after Saddam Hussein offered bases to the Afghan terrorist group Al Qaeda, which had hijacked civil airliners to crash them into the Twin Towers of the World Trade Center in New York on September 11, 2001, resulted in the execution of the Iraqi dictator on December 30, 2006, after the removal of the misogynist Taliban regime in Afghanistan`s Kabul in November, 2001. The attack on the WTC was designed to precipitate `world trade`, that is, that `brutality and violence` which is associated with homosexuality in pederasty`s `rough trade`1, because war is what homosexuals are for. Consequently, Saddam Hussein, `crusher` and `small handsome man`, was what Hollywood, Babylon, and the West wanted. Because Judaism, Christianity, and Islam constitute a unified path for `woman`s seed`, the history of the Earth is the concerted attempt of the `serpent`s seed` to exterminate her, and in the 20th century Christianity has become Satanism, because it`s unwilling to preach about `woman`s seed` and refuses to countenance Islam`s Moslems as Jesus` `seed`, even though Jesus taught that his teaching would evolve. 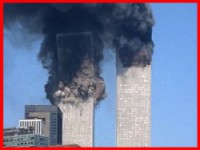 Because Western Christianity has espoused Hollywood, Babylon, that is, a mass media news and entertainment industry that predicates the removal of `woman`s seed` as the basis for any human scene on `moral grounds`, it`s insane. Christian `morality` consists of removing the penis from the scene, because `passive` homosexuals don`t need their penis to have their anus penetrated by the penis of `active` homosexuals. Consequently, the absence of the penis from the scene is indicative of the triumph of the active homosexuals. Obviously, the active penis of the futanarian woman was an obstacle to the homosexual hegemony, and so the homosexuals killed her, which leaves humans as the enslaved species of a pederast. Humans die as ephemerals, because that`s how the serpent in Eden enslaved the first man, Adam, and the first woman, Eve, when offering `fruit of the tree of knowledge of good and evil`, that is, death, `You shall be as gods.` (Gen: 3. 5) Ignorant brutes haven`t medical science enough to give them longevity of memory to remember how to operate and maintain sophisticated technologies, and so ephemerality ensures slavery, which is what homosexuality in pederasty and war is. Christianity is horror, rather than moral, because it hasn`t the moral integrity to remove the source of its insanity through education. In the movie Striptease (1996) with actress, Demi Moore, the adult perceives that it`s fiction, because the woman`s penis is missing from the scenes in which Demi`s character, Erin Grant, removes her clothes as an erotic dancer, whereas in the movie, Buffy The Vampire Slayer (1992), men`s stake in the future of actress Kristy Swanson, that is, the vampire slaying character, Buffy Summers, is the stake men have in women`s hearts, which is a transposition of the parasite`s penis that seeks to decapitate her. Both movies are horror films, because they all are in Western Christianity`s movie capital, Hollywood, Babylon, where the vampire`s scene in the mirror means the absence of the woman.