An interesting feature of humans is their habit of drinking coffee, tea, and alcohol. Although tea comes in many different varieties, the basic leaf ingredient is the same and, although there are many types of coffee, the bean is the essence of the drink. The ways in which alcohol is consumed are innumerable, and depend only on what can be mixed with alcohol to give it flavor. One of the more famous incidences of alcohol consumption is the `bread and wine` given by Jesus as the human host at the `Last Supper` to his disciple. As symbols of his `body and blood`, the `bread and wine` were used by the early Christian church in what became known as `Communion` in which the officiate gave `bread and wine` to the congregation as symbols of Jesus` `body and blood`, because Jesus` teaching was believed to transform the `body and blood` of humans:

The belief originated in the paradise of Eden, where the serpent encouraged Eve, the first woman, to `eat of the fruit of the tree of the knowledge of good and evil`, that is, death, saying `You shall be as gods.` (Gen: 3. 5) Disobeying God`s injunction that Adam, the first man, and Eve, should eat only of the `fruit of the tree of life`, which is immortality, God told Eve, `You shall crush the head of the serpent with your foot, although he shall bruise your heel.` (Gen: 3. 15) Men preferred death for the daughters of Eve, because they established host womb slavery of the futanarian human species of women born after Eden with their own penis` semen for their own host wombs, which would have made men defunct unless they pursued the path of parasitism and the maintaining of a human gene pool of ephemerals that would never suspect they were the slaved host wombs of the `serpent`s seed` of Satan, the angel who`d been turned into the serpent of Eden by God after Satan had rejected God`s plan that the human host would be greater than the angelic host. When the human host, Jesus, was betrayed by the disciple, Judas, at the `Last Supper`, Judas was, like Satan, betraying the human host. Born uncontaminated from his mother, the Virgin Mary, Jesus was a prefiguration of the Resurrection and Ascension to heaven of `woman`s seed`. When the human host at the `Last Supper`, who`d offered `bread and wine` as symbols of his `body and blood` to the disciples, was betrayed as a `dissident` to the Empire of the Romans by Judas and nailed to a cross of wood upon the hill of Calvary outside Jerusalem where he hung until he died before having Resurrection and Ascension to heaven, the bread symbolized the body and the wine blood, which suggests vampirism to those familiar with the Eastern European Transylvanian legends of the parasites that live off the `bread and wine`, that is, the `body and blood` of the human host. Decapitation is traditionally the method for killing a vampire`s immortality, that is, the parasite`s infatuation with its host, and Greco-Roman mythology provides a further clue to the meaning of alcohol, with Perseus` beheading of the Gorgon, Medusa, whose face so paralyzed her assailants that they were turned to stone. Alcohol is a paralytic drug while Al-ghūl, according to Arabian mythology, was a species of djinn, who were created by God, but weren`t men and women:

`The star Algol takes its name from the definite Arabic term Rās al-ghūl, or The Demon's Head.`1

Algol translates as `Demon`s Star` in English and is the name of the star in the constellation, Perseus, who cut off her head to transfix the monster, Cetus, and save the woman Andromeda. The meaning is that Perseus and the sea monster represent men`s desire that the women don`t sexually reproduce with each other, that is, the `demon`s head` is Perseus`, whereas women`s transfixing beauty is deemed transfixing, because it`s `djinn`, that is, futanarian women`s love for her own species.

In Greek society, host womb slavery amid homosexuality in pederasty was institutionalized to spread the contagion of conquest through war against cities like Troy where the patron goddess was Pallas Athene and her symbol, the horse, was used by the Greeks to gain access to the city as they constructed a huge hollow wooden horse to hide inside and emerge to enslave the host wombs of the Trojan women for homosexuality in pederasty and war when the Trojans took the horse into the city. In the late 20th century the `Trojan horse` was the name for the computer virus spread as men`s latest contagion against machine brains` storing of information that could help `woman`s seed` remember. The `bad machine code` developed by the `geek` successors to the Greeks was modelled on men`s HIV/AIDS` virus that was the incurable killer disease of the late 20th century spread by men`s mixing of blood, shit and semen in each others` anuses in mockery of women`s human sexual reproduction and the `biological warfare` waged against `woman`s seed` to keep her in fearful faithfulness to her monogamous parasite in host womb slavery. The `Trojan horse` is a symbol of men`s virality, because Pallas Athene`s horse was a goddess`, and the wooden horse of Troy was a hollow imitation, because men`s `seed` is viral. Troy is a woman`s war grave. 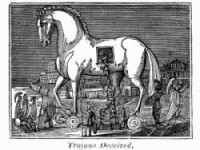 The vampire legend of Transylvania and other parts of Eastern Europe and elsewhere is of men who drink the blood of young virgins in order to live, and most socio-historical commentators agree that the prototype for the myth of the vampire is the figure of Vlad III (1431-76) of Wallachia, who impaled his victims upon stakes of wood, and which has been confused with the method for killing vampires, whereas Vlad, the model for Dracula in Bram Stoker`s 1897 novel, and from which many Hollywood Dracula movies derive their plot of killing a vampire by driving a wooden stake through its heart or decapitating it, was by definition a vampire. Consequently, the image of the vampire arising from the coffin to be decapitated is of Vlad, `The Impaler`, who becomes Vlad the impaled in the superstitious warding off of the demon represented by Perseus` cutting off the head of the woman to paralyze the monster so that Andromeda can be released. In terms of the Greek myth Perseus is the `Demon`s Head`, because he represents the desire that `woman`s seed` doesn`t sexually reproduce with each other, and so he`s the vampire, and the monster paralyzed by the beauty of the Gorgon`s head of the Medusa woman is man before homosexuality in pederasty and host womb slavery of women for conquest through war, which requires host wombs and so Andromeda is saved. In the vampire myth the future of women`s penis is transposed into men`s stake in the heart of `woman`s seed`:

If `woman`s seed` is interpreted as the grapes in the winepress of the wrath of God, men are treading. In modern culture caffeine is associated with the coffin because it`s a stimulative drug encouraging the body to life, while tea is a metaphor for decapitation, because the beheaded corpse is a Greek Tau. Although Jesus` cross is the obvious Tau symbol in Western civilization, culture and art, the meaning is of `woman`s seed` losing a head, where `a head` was the generic counterculture term for cannabis users in the 1960s, when enlightened `heads` protesting in the United States against America`s involvement in the Vietnam war (1954-75) successfully removed US Republican Party President, Richard M. Nixon. Jesus was a protestor against `Nam from a Roman point of view, which is why the insurgent, Barabbas, was spared. The crowd petitioned the Roman judge, Pontius Pilot, to liberate the `freedom fighter`, rather than Jesus, who was decapitated as the 1960s equivalent of a dissident `tea-head` preaching Resurrection from the coffin and Ascension through the brain, which require at least those foods and drinks that the modern age has been able to promote as health giving, that is, caffeine and tea, but which Satanism has degenerated into coffin and decap. 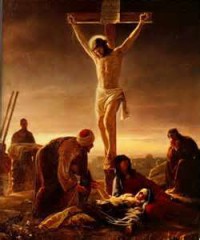 Although Algol is associated with the star that`s `The Demon`s Head`, and Jesus` star is associated with the birth of the human uncontaminated by male semen, from Jesus` mother, the Virgin Mary, because the star appeared above the place of Jesus` birth, a stable in Bethlehem, Algol actually relates to misogyny`s perception of women, that is, misogyny doesn`t want women to sexually reproduce with each other, and alcohol is the substitute for love`s transfixation, which means that men who don`t want women are Rās al-ghūl, or devouring ogres, rather than women, which is why men are trunks after alcohol, rather than drunks, and the missing head for the woman`s star of Resurrection and Ascension is falsely designated `Demon`s Star`, because it`s a myth conceived in homosexuality and pederasty for war against `woman`s seed` and not a human legend.

Alcohol is the `demon drink`, because men want to be trunks, rather than succumb to love, while the Gorgon, Medusa, represents the love of `woman`s seed` for women, and the saving of the beautiful Andromeda as recorded in the performance of actress Judi Bowker in the Hollywood movie, Clash Of The Titans (1981), for example, actually constitutes men`s celebrating the removal of the woman`s penis for the sexual reproduction of her own brains` powers, and the enslaving of the host wombs of women for homosexuality in pederasty and war`s lovelessness masquerading as intoxication. The ruse for the Trojan war, for instance, was the abduction of Helen, wife of the Spartan, Menelaus, whose brother was king of Sparta, and who sent the Greek fleet to Troy to recapture Helen from her abductor, Paris, who was in love with her and therefore represented `The Demon`s Head` to be removed by homosexuality in pederasty and war so that the parasitical enslaving of women`s host wombs that, despite men`s depredations, were still able to produce civilization, culture and art, her devourers could continue in Satanism.