In the ancient drama by the Greek Sophocles, Oedipus Rex (c. 429 B.C.), Antigone leads her father’s footsteps away from Thebes after he blinds himself for marrying his mother, Jocasta, who hangs herself, so his daughter agrees to be his guide. Obviously, he looks like a father. Thebes, the Egyptian city, was where Oedipus had ruled as king subsequent to his being given the answer to the riddle of the Sphinx, which is a plague upon Thebes before his rule, ’What goes on four legs in the morning, two in the afternoon, and three in the evening?’1 Oedipus answers, ’Man.’ His name means ’swollen foot’, so circumambience is an important issue in the development of the plot. Exposed on a hillside as a child because of a prophecy he’d kill his father and marry his mother, Laius and Jocasta, Oedipus was lame thereafter. Encountering his father, unbeknownst to him, later as an adult on the road, he is killed by Oedipus in a dispute over who has ‘right of way’. The seer helps him marry the queen of Thebes, who’s Jocasta, and so the tragedy unfolds. 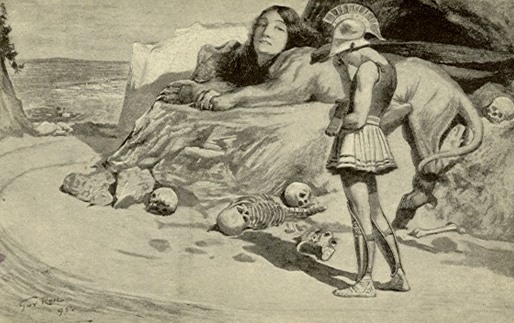 The answer to the Sphinx’s riddle is usually understood as meaning that an infant crawls, whereas an adult is bipedal, while an old man has a cane. In Oedipus’ case, he’s blind, so it’s a white stick distinctive of a blind man. However, Antigone appears to be the third leg, which suggests that she’s a foot. Sir Arthur Conan Doyle, who wrote the turn of the 20th century detective stories about Sherlock Holmes, would be correct in assuming, ‘The game’s afoot.’2 As women have their own penis’ semen for the sexual reproduction of their own brains’ powers to develop their species separately from men, that is, they’re the futanarian futa race, Antigone is a foot after the model of Eve in the Old Testament of the Bible, which is the Torah and Talmud of the Jews, that is, their history and law. 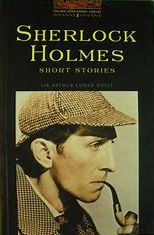 The angel, Satan, was turned into a serpent by the creator, God, for rejecting God’s plan that the human host would be greater than the angelic. God told Eve, the woman, and Adam, the first man created by God, that they could ‘eat of the fruit of the tree of life’, which was immortality, but not of the ‘fruit of the tree of the knowledge of good and evil’, that is, death, but Satan said, ‘You shall be as gods.’ (Gen: 3. 5) Expelling Eve and Adam from the paradise of Eden where they’d dwelt, God tells Eve her seed will prevail, ‘You shall crush the head of the serpent with your foot, but he will bruise your heel.’ (Gen: 3. 15) Christians believed that the New Testament of the teaching of Jesus, ‘Christ’, ‘the chosen’, born from his mother, the Virgin Mary, as woman’s seed, superseded Jewish law, ‘Love your neighbor as you love yourself.’ (Mk: 12. 31) In Christian iconography the Virgin Mary is depicted crushing the head of the serpent with her foot, because Jesus was taken to the hill of Calvary outside the city of Jerusalem in Roman occupied Palestine and nailed to a cross of wood where he died, but he experienced Resurrection and Ascension to heaven in prefiguration of that of women’s seed.

As Antigone is a woman, so a member of the foot race, she’s a daughter of Eve, which means that Sophocles’ Oedipus Rex is a step on the way to understanding women’s role in relation to fathers. As women’s seed sexually reproduce their own brains’ powers for the technology needed to achieve interstellar spaceship travel, and the medical science of rejuvenation for the memory to keep their colonies upon the planets amongst the stars of heaven, they don’t need fathers, but rather fatherers. Oedipus is blind, because he doesn’t see that. When Antigone agrees to lead his steps onward, she’s in the role of the ‘good Samaritan’ (Luke: 10. 33), who isn’t a Christian, but is recognizably a good person. However, in modern terms she represents the woman who won’t let go of her father’s penis, which her mouth is so firmly wrapped around, because of his role as mainstay and provider, that it’d be impossible for her foot to get off the ground, while the father-daughter relationship impedes the human race’s progress.

The Sphinx kills and eats those who can’t answer her riddle, which is described as a concomitant of the murderer of Laius’ remaining unknown, that is, Thebes is beset by plague, because of Laius’ murder. That Oedipus killed him, and is looking for the murderer to lift the curse on Thebes, is ironic, as it isn’t the symptom of a curse, but rather the sign of a desire to remove the incest taboo so that women’s seed can reproduce within the human family. Incest is forbidden, not because there’s a danger of intra-familial sex, but to prevent women from having sex with each other and reproducing as a genus, that is, it’s a taboo promoting genocide, so the plague, represented by the Sphinx, signifies the blindness of men in that they don’t want women’s seed to know they’re host womb slaved in parasitism.

In ancient Greece homosexuality in pederasty for the waging of war was institutionalized alongside womb slavery, which by the 20th century had emerged as the HIV/AIDS plague. Discovered by Africa’s DR Congo in 1983, the human immune deficiency virus (HIV) was found to be a variant of the simian immune deficiency virus (SIV) transmitted between homosexuals engaging in sterile mockery of human sexual reproduction. Inserting their penises into each other’s anuses the homosexuals spread ‘the monkey disease’ through infected semen. The acquired immune deficiency syndrome (AIDS) resulted in collapse of the organs of the body and brain death, a direct concomitant of men’s rejection of women’s seed for the proper development of the human race, which is the meaning of the Sphinx’s riddle.

When the SARS virus emerged as a global pandemic in December 2019, scientists observed that people were more susceptible to severe acute respiratory syndrome (SARS), causing lung collapse and brain death, by the human system’s exposure to HIV/AIDS, that is, anal penetration released fart gas, a symptom of its SARS spreading, which flatulence virally acted as a means of transmission. When Vladimir Putin, President of the Russian Federation, ordered the Red Army to invade the Ukraine with heavy flamethrower TOS (TOC) vacuum weapons on February 24th, 2022, the stake was the ass of the victims, as it’d been with his namesake, Vlad ‘the impaler’ Dracul III of 15th century Wallachia, then modern Romania, to release the flatulence, and the operation of the TOS 1 and 2 missile launcher, to release a flammable vapor, before igniting it to collapse the lungs and incinerate in the vacuum, was the conventional version of the AIDS/SARS biological weapon’s deployment to fierily initiate brain death.

Vlad Dracul (1428/31-1476/77), the model for Bram Stoker’s Dracula (1895) novel was a draco and voivode of Wallachia, that is, a fire-breathing war dragon, although not the ‘red dragon’ of Jesus’ disciple John’s apocalyptic vision of the future, Revelation, which is the Red Army of communist Russia. AIDS emerged when DR Congo was communist, and the virulent version of SARS at a Wuhan city hospital, Hubei province, China, which similarly has a ‘dragon lord’ culture, is communist, that is, communism has been developing, ‘The dragon stood before the woman who was about to give birth so that it might devour her child the moment it was born.’ (Rev: 12. 4) The woman is the European Union, with its blue flag of twelve stars, a symbol of their preparing to accept the application of the Ukraine for membership amongst that federation of nations, ‘A great sign appeared in heaven: a woman clothed with the sun, with the moon under her feet and a crown of twelve stars on her head.’ (Rev: 12. 1) Although the child is described as ‘male’, and ‘he who will rule the nations with an iron scepter’ (Rev: 2. 27), as women’s seed are hermaphroditic, those with penis’ semen are male to those with wombs only, while homosexuals are always representative of sterility and women’s seed sterilized, because they don’t want the slave futa race to run and escape to the stars; without having any attachments.

2 Doyle, Sir Arthur Conan ‘The Adventure of the Abbey Grange’, The Strand Magazine, 1904.