The word `jug` has a sexual connotation, which accords with the perceptions that the breasts of a woman are `jugs` that contain milk. Those of men don`t contain milk, which suggests milk is for their daughter, a supposition borne out in Judaism where, in effect, it is only possible to be born a Jew if you are a woman.1 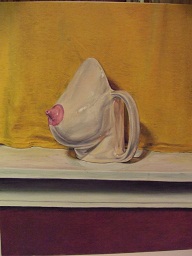 In Revelation, the `red dragon` is a symbol of war, as the devouring `blood plague` of homosexual pederasty, which waits to devour the `New Redeemer`, destined to protect the woman, `hidden` upon the Earth, before she leaves to `sow` her `seed` in heaven. In ancient Greece, society was based on the principle that war was a means to spread homosexual pederasty, and women were enslaved `wombs` from which they emerged to `plague, games` of assault. 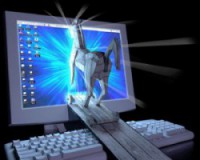 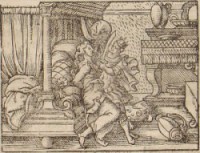 The `hidden` woman of the Earth prepares to fight a victorious war against the evil serpent`s `seed`, who receive perdition, while she receives a new heaven and Earth. Because she `sows` her own `seed`, she has her own penis, which futanarian women have (https://www.futanarian.com).  Men don`t have breasts because they`re homosexual pederasty`s parasitical alien viral form, that is, men aren`t human, whereas women are a species, and that`s why the Bible is about Redemption.  T.S. Eliot, in The Wasteland, `twits` male consciousness for rape: 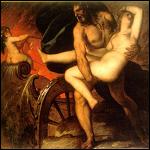 In Greek mythology, Tereu was the king who raped Philomela and then cut out her tongue so that she couldn`t speak. She was transformed into a nightingale so her song could be heard. Giving birth is what makes women vulnerable, which is why homosexual Greek pederasts raped them, and `jug` is a word signifying `coitus` because of its sound. The boy sons (poisons, HIV/AIDS, etc.) aren`t human, but alien parasitical viral life forms stealing breast milk from the woman whose nipple they`re sucking on, which means that they`re boy sons (poisons; mastitis, etc.) at the breast as well as boy sons (poisons; HIV/AIDS, STDs, etc.) from her womb. 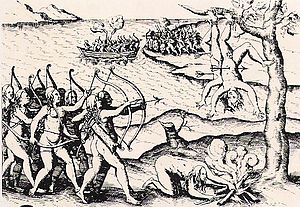 The mythology of the Amazons was that a woman had her breast removed so that she could use a bow and arrow more readily, which is a metaphor for what a woman is prepared to do to defend her daughters. A single breast mastectomy is a symbol both of the poisonous (boys & us) nature of homosexual pederasty`s parasitical alien viral life form, and the woman`s final aim of holding her daughter to her breast, rather than her boy sons (poisons; mastitis, and mastectomy). In other words, the Amazon woman is prepared to remove one breast, rather than have the poisonous (boys & us) serpent suckle upon her nipple:

`And upon her forehead was a name written, MYSTERY, BABYLON THE GREAT, THE MOTHER OF HARLOTS AND ABOMINATIONS OF THE EARTH.` (Rev: 17.5)

The concomitant of the `Greek horse` is the `Greek whores`, that is, the poisoners (boys & us), which the Bible condemns in the `eleventh commandment`:

`Thou shalt not suffer a witch to live`, where witch is `poisoner` and she is the `Greek whores`, that is, `the boys & hearse`, which is the `Greek horse` as the wooden `coffin` of the `hidden` woman, the Earth`s true species, whom the alien parasitical viral poisons (boy sons; HIV/AIDS, STDs, mastitis, etc.) want to hide more thoroughly in her grave.

In Egyptian mythology, the god Osiris is dismembered by his evil brother Set, and his parts are scattered to the four corners of the Earth by dogs, who bury them where they become bones. In the psychology of Carl Gustav Jung (1875-1961), there are four functions of consciousness necessary for the complete functioning of an individual human being. Jung`s four functions correspond to the four corners of the Earth, and Isis` restoring of Osiris is the articulation of the four functions, represented by her giving him a new penis, symbolizing the sum of knowledge gained from this sojourn upon the Earth by God incarnate in humankind. Since the descent of the Paraclete, or fourfold `spirit of God`, as `teacher, guide, comforter and helpmeet`, God`s awareness from that incarnation is functional differentiation insofar as Revelation denotes an awakening knowledge of women as a species and men as her virus. 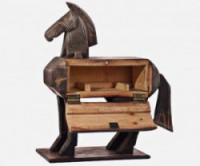 The `TV set` is the bones of woman`s `box`, where we watch her die in her latest struggle to be born. In 21st century terms, the `TV Set` is the `blood plague` of homosexual pederasty`s devouring `red dragon` of Revelation`s `plague games` of warfare and terrorism. As the Gulf`s `TV war` and `Greek horse` of 9/11`s Arab `visitors` from Boston`s East Coast showed. For the homosexual pederasts, woman is a `TV`, that is, a transvestite `clothes horse`, who can be made to dress up as `Action Man` and die. There are always lots more enslaved women`s `host` wombs, from which the `red dragon` of homosexual pederasty and war can emerge, that is, men as evil alien parasitical viral life forms, who emerge to kill her as `TV`. 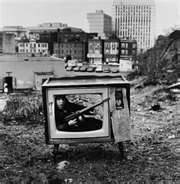 T.S. Eliot employs the myth of Philomela and Tereus as a metaphor for what ails society. The Wasteland poem is about the `Grail kingdom`, which is the land of Jesus, because the Grail was the bowl from which Jesus ate and drank at the `Last Supper`, before his crucifixion. In fellowship Jesus describes the `bread and the wine` as his `body and blood`, and Judas goes for his jugular because Jesus is, psycho-spiritually, female, which is what Jung foresaw as evolutionary psychology.  If a man wasn`t to be a `demon`, he`d need a female psychology, which is what Redemption means. In terms of Greek mythology, Jesus is an `Amazon`, who`s removed both breasts, and born male by parthenogenesis, without the evil serpent`s `seed`, that is, homosexual pederasty`s devouring father-son relationship based on `blood`, he`s observant. 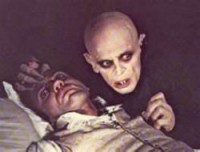 Judas betrays Jesus, according to biblical commentators, because Judas is a descendant of Cain, the first murderer, and Lilith, mother of `demons`, that is, even if not `sexually` homosexual, he`s psychologically `homosexual`, because the `blood plague` of homosexual pederasty and war is the `valence` of murder. In short, Judas is the `homosexual` as the vampiristic alien parasitical viral life form that`s `blood plague`, whereas Jesus` offering of his `body and blood` is his recognition that, if his body and blood is taken as a means to immortality, then the word `vampire` has another `valence`. 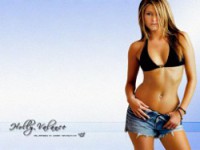 In Christianity the only creature that sought to protect Jesus on the cross was the robin, which attempted to remove the largest of the thorns from the crown of holly placed upon the head of Christ, crucified, in mockery of his torment. According to the legend, the bird`s breast is stained blood red, because of the thorn that pierced it. 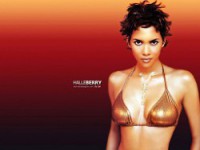 Traditionally, it`s `black and white` that a woman needs a man whereas, in biblical terms, because women have a penis, Halle Berry and Holly Valance are symbols of Hollywood`s new heaven on Earth. The evergreen blood of Halle Berry and Holly Valance isn`t `black and white`, but the new uncontaminated valence of woman as a species with her own penis and semen, which is prefigured in the New Testament by the self-fertilizing Virgin Mary, who is associated with the feminine Holy Spirit, and its procreative powers, symbolized by the colour green, as Jesus is associated with red, the colour of blood, and symbolized by the robins` stained breasts, because pierced in its struggle to remove the largest thorn from the crown of mockery placed upon Jesus` head at his crucifixion.

Jesus was born not of man`s semen, but the `spirit of God`, and his mocking at the crucifixion prefigures that of women as a species with their own penis, and semen. Racism is homosexual pederasty`s `plague, games` of `black and white` to maintain the enslavement of women for `plague, game` show TV; `hosts` for the parasites of homosexual pederasty`s war against the species` womb. Metaphorically restricted to `black and white TV`, women represent the economical provision of `colour` for homosexual pederasty`s `higher life form` of `blood, plague` that wants to watch God, as an incarnated transvestite, die in `TV war` and `TV violence`. Because, rather than let the woman leave, they`ll kill her: live as `TV` at 9.11.

1 In fact, you are a Jew if you are born from a Jewess, which means that, without women, syllogistically there aren`t any Jews; so only women are Jews.