Jungiananalysisliterary > The Magic of Psychology

The Magic of Psychology

The Magic of Psychology

The use of Jungian archetypes and symbolic motifs in the analysis of the unconscious is widespread even amongst those not expert in the fields of psychology/psychiatry. Their role as an indicative framework with which to measure the level of consciousness/neurological functioning  in an individual is not. It is, for example, well known that the unconscious of a woman from Manchester may contain elements from symbolic structures/systems as diverse as Egyptian mythological fragments and Tibetan mandalas, as well as images from the Judaeo-Christian tradition that constitutes her background. The point here being that knowledge of the various symbol systems/frameworks, which is the task of a Jungian analyst, is essential in mapping the level of development/functioning. The chakra system of energy points and their associated mental images/symbols in Kundalini yoga and the system of Sefiroths in the Judaic system of Kabbalah are but two instances of models available for the purposes of such mapping. The importance of the channelling of sexual libido in ensuring developmental progress cannot be over-emphasised. Consultations with experts in the fields of pediatrics, particularly with regard to the linking of movement therapy with speech articulation suggest that concentration upon correct body posture with regard to the crown of the head produces normal individuals at the expense of  their creative potential. In Kundalini yoga the third chakra in the vicinity of the solar plexus is described rather poetically as a plenitude of jewels, a reference to its in potentiam character, corresponding in psychological parlance to the wealth of psychic contents waiting to receive actualization in the psyche of the individual, the fruition of which is symbolized in alchemy as the cauda pavonis or peacock’s tail but which might also be described as the ‘crown jewels’, a suggestion that has both a sexual connotation - in the English vernacular a reference to the male genitalia - and a psycho-physical dimension in terms of the crown of the head or lotus chakra in yoga. Sex or Tantric yoga is, therefore, indicated as a useful form of therapy in assisting individuals who, for whatever reason, are unable to realise their blocked potential due to socio-economic conditioning which tells them that work, marriage and the raising of a family - a situation associated with the third or solar plexus chakra in the Hindu system - should be the zenith of their aspirations, and is in fact ‘normal’.

Of course, vested interests may have a role to play. There are elements of society - Freemasons, for example - whose goal is to maintain the status quo and keep the mass of people at a low level of consciousness because they are easier to manipulate that way. Emphasis in Christianity, for example, upon logic in the form of  Logos rather than Eros may have been necessary for the channelling of libido into the creation of a technological approach, but at the expense of the brain’s as-yet unmapped capacities (a human being we are told uses only 10% of its potential); in other words, the field of Eros is a territory which needs to be opened up and fully explored if an individual is to maximize his/her intellectual/creative potential.

Recent experimental studies in the field suggest that the use of symbolic structures and archetypal frameworks in the environment can be useful in producing a therapeutic relationship between individuals and what often seems an alien and hostile world surrounding them. Results indicate that the use of  symbols in the externality as iconographical tools - just as one might ‘click’ on icons in a computer - by focusing one’s energies upon a particular motif, produce effects associated with that particular ’icon’, thus  creating a more creative, playful and harmonious relationship between ‘patient’ and  his/her reality. A concept which has far reaching possibilities with regard to future scenarios.

In theoretical physics there is a very famous experiment in which an electron gun is fired at a target. A camera placed next to the target records that each electron arrives as if  travelling in a straight line. However, further observation reveals that, in spite of appearances, if the electrons are watched by technical apparatus at a point mid way between gun and target, they show signs of deviating from the direct path and, as it were, choosing one amongst many alternative paths to the goal, that is, each electron chooses from a plethora of possibilities within what the physicists describe as a ‘probability wave’, a notion that gave birth to the theory of parallel universes or multi-realities and which has some significance for us in our concerns with transcendent consciousness or higher levels of neurological functioning. In short, the extrapolated conclusion would be that, if human consciousness can be said to be responsible for determining the reality which it inhabits, then it must also be possible, by changing the level of consciousness or neurological functioning - either developmentally organic, biochemically, or some kind of fusion of the two approaches - to choose which world to inhabit or even produce alternative worlds through the power of what Jung referred to as creative imagination.  The notion of world-as-computer offers the further possibility of  individuals being able to simply ‘ask’ for and obtain what they require by, as it were, ‘clicking on the icons’ around them, which raises another question. What constitutes an ‘icon’? 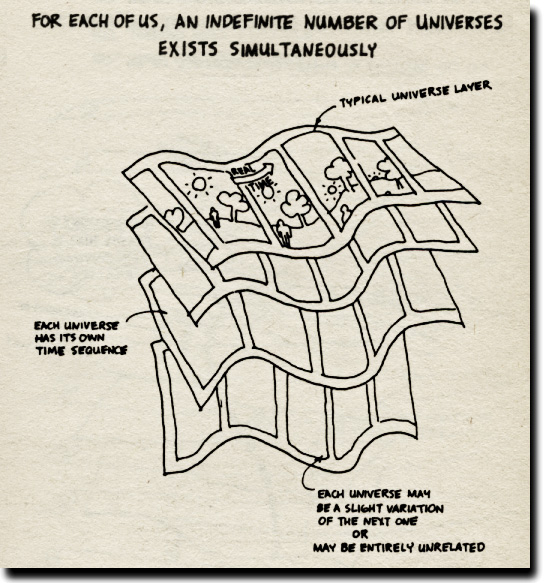 The classical figure of Madonna and Child is archetypal and iconographical whereas the figure of Madonna the pop-singer isn’t - although what she represents probably is, that is, meditating upon her image of  pop-icon would probably produce effects of the ‘Whore of Babylon’ variety. A further question would involve discussions of  whether or not moving objects can be categorised as having the attributes of an icon, a contention that brings us into the areas of  behavioural psychology and what I have described elsewhere as ‘human hieroglyphics’, an ancient form of symbolism familiar to us from Egyptian temples and, to take a rather less well known example, the Tarot deck of the seer in which the posturings of the characters depicted in the twenty two major arcana are associated with the hieroglyphical forms of the twenty-two characters of the Hebraic alphabet. And what of Yin and Yang, the male and the female? Indian temples celebrate the acts of physical love in three-dimensional stone carvings, so what would a study of the ‘hieroglyphics of human sexuality’ reveal?

Ethical questions remain to be resolved for advocates of both the biochemical and developmentally organic approaches. On the one hand, at what point is it appropriate to intervene pharmacologically in the growth processes of an autonomous individual? On the other hand, at what point is it desirable for an individual’s awakening libido to be channelled into sexual or mental activity? What is the correct balance? What, as Karl Marx once asked, is to be done?

Study requires the stimulation and observation of the creative imaginations of patients or subjects in relation to the available symbol maps in order to ascertain what, if any, correlations exist between the ‘map[s] and the territory’ of the collective unconscious. The implementation of a programme resulting in a description of the effects produced in the environment by a creative interface between human consciousness and the world-as-computer hypothesis.  The use of hypnotherapy to facilitate the unlocking of the individuals self-awareness and requirements in terms of his/her potential and goals. An examination, involving aspects of behavioural psychology in connection with Jung’s concept of imaginatio to discover the effects produced in the environment by ‘human hieroglyphics’. A study of  the effects produced by the ‘hieroglyphics of human sexuality’ involving sex therapists/therapy and analysis of the static image as found in pornography of the ‘Playboy’ or ‘Leo’ type as well as cinematographically.  The study might also be extended to what might be described as ‘archetypal archaeology’, that is, the use of archetypal icons to ‘access’ racial memories - perhaps involving regression therapy - to, as it were, ‘visit’ the past; or, and which might be more exciting, if certain products of the past were, as some contend, designed/constructed by ‘visitors’ from other worlds/dimensions, either discover something of  that alien psychology/psyche through the aforesaid techniques  - what might we discover about alien psychology by observing the effects produced by intense meditations upon the god Anubis, for example, a figure linked in Egyptian mythology with the binary star system of Sirius and, traditionally, telepathy? - or make contact with the psyches of the now-living ancestors of those visitors both here-and-now and, who knows, out-there-somewhere too through what might be described as projection therapy, that is, visiting or producing/creating the future by accessing the developmental archetypes of perhaps alien psychologies as preserved in myth, folklore, stone and image.