Jungiananalysisliterary > The Red Dragon And The Woman Clothed With The Sun

The Red Dragon And The Woman Clothed With The Sun

The Red Dragon And The Woman Clothed With The Sun

Jesus was born from a virgin as a sign that women don`t want men`s `seed`, and Jesus remained celibate until he was tortured and murdered by men as a further `sign` that men don`t want women`s `seed`, which is what the figure of the woman of Revelation `clothed with the sun and with the moon at her feet` represents. The devouring `red dragon` waits in vain while the woman gives birth to the `New Redeemer` who protects her while she`s `hidden` upon the Earth before she leaves to `sow` her `seed` in heaven. In Eden the evil serpent`s `seed` is what perpetuates `enmity` with the woman`s `seed`, and Eve is told by God in Genesis she`ll `crush the head of the serpent with her heel` as she leaves.

In Revelation the `plague of blood` is identifiable as a valence of the `red dragon` of homosexual pederasty, that is, the evil serpent of Eden full grown, and which spreads itself as a virus through war. Ancient Greek society and culture was based on the principle of the enslavement of women as `host` wombs so that the Greeks could spread the `disease` by training their `boy sons` to `plague games`, which appeared in the Revelation of the 20th century as `poisons`, through their `boy sons`, as HIV/AIDS` `blood plague`. The prototypical mode of spreading the `Greek` poison is known as the `Greek horse` method from the nature of the `gift` left by the Greek besiegers of the city of Troy while hiding inside the huge wooden structure. Like the HIV/AIDS virus, which appears friendly to the T-cells in order to kill them, the `Greek horse` was full of `boy sons` that emerged to terrorize and enslave the wombs of the Trojan women.

The 20th century equivalent of the `Greek horse` is the psychological terrorism and biological warfare against women`s wombs that is the poison of HIV/AIDS, which valence of the `red dragon` of homosexual pederasty and `blood plague` was manifested on 9/11 when terrorist hijackers masqueraded as `friends` of New York state from Boston, Massachussetts.

Socio-historically, the `terrorist cells` of Al Qaeda were `Greek`, and the `false friends` of the city of Troy, upstate New York. New Yorkers worked `like Trojans` to save people on 9/11 and, in terms of the body`s immune system, were the `T-cells` defending her, whereas the `terrorist cells` of Al Qaeda `feigning friendship` towards New York`s `Trojans` in the `civil` aircraft they hijacked, correspond to the `friendliness` of the HIV/AIDS` cell that mimics the healthy `T-cell` in order to kill it and the body. The hijackers crashed their `Greek horses` into the World Trade Centre, where `trade` is a homosexual euphemism for `casual sex`, that is, the `trading of bodily fluids` resulting in the `transmission` of the HIV/AIDS virus:

`They had as king over them the angel of the Abyss, whose name in Hebrew is Abaddon and in Greek is Apollyon (that is, Destroyer).` (Rev: 9.11)

9/11 was planned by a homosexual who saw the attack on the World`s `T` Centre as a continuation of the `plague games` of the `red dragon` of homosexual pederasty that had been going on in the `Greek`, that is, homosexual, mind since Troy. Mustachioed Saddam Hussein has the prototypical `gay biker` look, but the USA supported him with the world`s 3rd largest army to defend their interests against former `favourite` Iran, where the Shah was deposed in 1976 because of his dragon-like behavior towards his people. Osama Ben Ladan`s Taliban got rid of the Russians in Afghanistan but was bad ` trade` also. 9/11`s `boy sons` of the `red dragon` of homosexual pederasty`s `blood plague` were `poison` for the `Big Apple` of New York`s Eve`s `friendship`, which had been growing warmer, and precipitated global terror against Arabia and her `hidden` women. The USA`s `false friendships` effectively represent the `red dragon` of homosexual pederasty`s `blood plague`, that is, the transmission of incurable viruses for the sake of `casual sex`:

`Lesbians` are taught that they`re `sexually abnormal` if they gravitate towards women, but women are their species, and she has her own penis as `futanarian`. Consequently, the Kore relationship of mother-daughter1 is the important one. If a daughter is born within a `conventional warfare` marriage, the man is the `viral` component, because he`s the `alien parasite` that has enslaved the woman`s womb to knowingly, or unconsciously, perpetuate the `enmity` of the serpent for Eve`s `seed` since the biblical `Garden of Eden`. It devolves upon the mother to give her daughter proper sex education in which the sexual valences of women for each other are of uppermost relevance, and the knowledge that women are a species while men are a parasitical virus to be treated as `invalid`, that is, in need of `Redemption`, is paramount.

Men`s true valence is clear from an early passage in Genesis that describes how Onan refused to impregnate his brother Er`s wife Tamar after Er had been killed by God for failing to impregnate her also. Onan is the hero of the early Bible because he recognized that women didn`t want men`s `seed`, which is what the birth of Jesus from the Virgin Mary, and Jesus` subsequent celibacy, that is, refusal to impregnate a woman, reinforces. 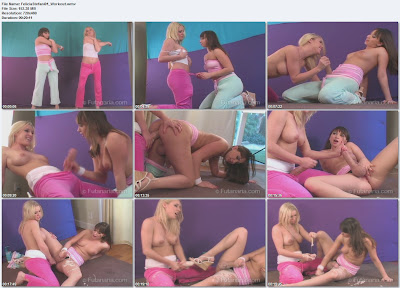 Women are taught that men have the penis, and so monogamous faithfulness to a man is their escape route from HIV/AIDS and death. A teaching reinforced by HIV/AIDS itself as a valence of homosexual pederasty, that is, as homosexuality`s psychological terror weapon and weapon of biological warfare against woman and her Earth. Patriarchal interpretations of HIV/AIDS want women to understand that faithfulness to a single man`s penis is the reason why God`s practicing psychological terror and biological warfare against her, whereas if women have a penis of their own and so are a species, the only penis they need to be faithful to is each others`.

In the New Testament Jesus` perception was that he was to be tortured and murdered, and allowed it to occur so that the psychopathic valence of the `red dragon` of homosexual pederasty`s `pattern` was distinguishable. Hollywood`s movie Red Dragon features a character called the `Tooth Fairy` who represents the `pattern` from the `other side`:

`... [he] kills at the behest of an alternate personality he calls `The Great Red Dragon.` He is obsessed with a William Blake painting, The Great Red Dragon and the Woman Clothed in Sun, and believes that each victim he `changes` brings him closer to `becoming` the Dragon. His pathology is born from the severe child abuse he suffered ... `2

The `red dragon` and child abuse by the `Tooth Fairy` are one and the same because it`s homosexual pederasty and its valence is torture and murder, which is why the `woman clothed with the sun and with the moon at her feet` delivers the `New Redeemer` despite the attentions of the `red dragon` that waits in vain to devour her child.

Children seek attention, but `Attenshun!` is a military valence of the word that`s supposed to signify respect, but actually denotes a declaration of war by the `fartherers` of the `boy sons` on those women upon whom respect is supposedly conferred, which is why the `red dragon` is depicted as conferring its unwanted attentions upon the woman of Revelation at the birth of her protector.

Men are taught to be attentive to women, but it`s the penis that`s supposed to be stiff, and not the legs, arms, neck and back, that is, those who `stand to attention` when women are present aren`t expressing anything other than the `poisons` repressed, or even conscious, desire to kill her, whereas she wants to believe men are her `protectors`, because she instinctively intuits her need for a `New Redeemer`.

After the `hidden` woman leaves Earth to `sow` her `seed` in heaven, she fights off an attack from the `red dragon`, and receives a new heaven and Earth from God as her eternal reward, while the `seed` of the evil serpent receive perdition as a punishment for  their psychopathy. The followers of Jesus, and the `hidden` woman, aren`t those who torture and murder as the followers of the evil serpent`s `seed` become the `red dragon` of Revelation, but that`s why the evil followed Jesus, and that`s why they look for the `hidden` woman, or keep her `hidden` as their captive, because men are an alien parasitical virus, and its valence is `psychopath`.

1 The Greeks called the mother-daughter relationship the Kore, and it`s `hard core` in terms of species` development.